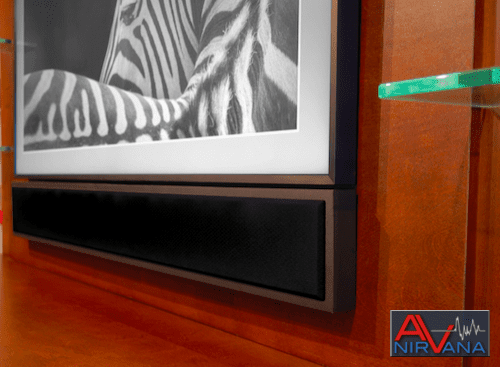 November 20, 2019) Samsung’s Frame TV is undoubtedly a niche product, targeting those that value aesthetics and styling over all else. The entire gist of the TV, which can cost as much as $1,700, revolves around its 1.75” cabinet that resembles a flush-mount picture frame. And while Frame TV’s 4K QLED panel works as a television, it also can be used to display Hi-Res art images as well.

Of course, buyers opting to purchase a Frame TV are placing room integration at the top of their “wants” list, which certainly inhibits their ability to integrate add-ons such as a soundbar. After all, most soundbars carry a speaker-like presence, and many are bulky and unsightly. Here’s where Next Level Acoustics enters the picture, introducing a soundbar explicitly crafted to match the Frame TV’s looks.

Next Level Acoustic’s “Fusion Frame” features the same 1.75” flush-mount cabinet found on Samsung’s design, allowing the two products to exist as one. The key, however, is the speaker’s ability to deliver quality sound, utilizing a proprietary MDF enclosure with a radical internal air-load management system and proprietary woofers capable of bass extension as low as 72Hz.

“A typical cone woofer can’t perform as needed with a shallow cabinet, so we engineered and built our own 4.5″ aluminum dome drivers. The drivers have stiff, non-resonant cast baskets mated to powerful rare-earth Neodymium magnets. A high flux 2-layer voice coil drives the ultra-stiff aluminum dome suspended by a butyl rubber surround for very high acceleration and excursion. The result is clear, dynamic bass and smooth, detailed mid-range, much more than one would imagine possible from such a thin soundbar”, said John Sollecito, Next Level Acoustics head of Engineering and Manufacturing.

As for high-frequency performance, Next Level Acoustics has utilized a 1″ soft-dome tweeter design manufactured by Vifa.

The Fusion Frame is a passive speaker, meaning outboard amplification is required to operate the speaker. According to the Next Level Acoustics, the design’s six models (which include 43”, 49”, 55”, and 65” options) are relatively easy to drive. The 43” Stereo, 49” Stereo, 55” Stereo, and 55” LCR models have a sensitivity of 87dB, while the 65” Stereo and 65” LCR models carry a sensitivity of 88.5dB.

The soundbar is available with a black Plex finish, which matches Samsung’s standard Frame TV bezel. However, buyers can request a white lacquer maple veneer finish (or either of Samsung’s other color options) as part of a customer order. And for those wanting a generic “non-frame” version, Next Level Acoustics can accommodate that too.

Next Level Acoustics sells a complimentary 10” in-wall subwoofer (CI-IW10S) that’s designed to fit between standard 2” x 4” studs. This particular model can extend bass performance down to 34Hz, utilizing as little as 40 watts of power.

For more information about the Fusion Frame, visit www.nextlevelacoustics.com. 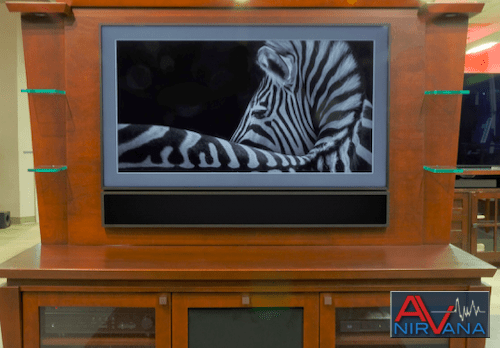 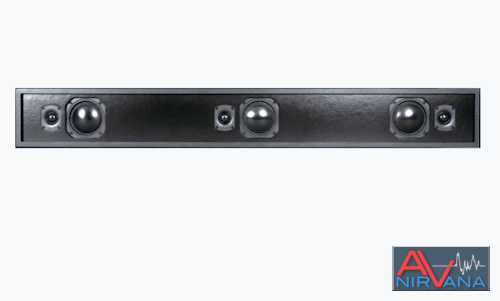